Ukrainians love to eat. It’s a deep-rooted tradition. Of course, the Ukrainian kitchen has its hallmark dishes. A few years ago Ukrainians from around the world took to the Internet and selected ten of their favorite national dishes from a list of 3600 recipes. With this top-ten list in hand, here are Ukrainian Chicago’s most special magic of the traditional Ukrainian kitchen. 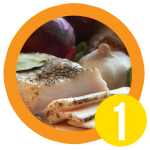 In first place, without a doubt, is salo with garlic. Salo is a traditional Ukrainian snack that doesn’t sound that appetizing if you think about what it really is — a cut of pure, raw fat from the back of a pig. But it’s really tasty, especially if it’s cured in salt or smoked, on a piece of dark bread, and with a thin slice of garlic. Historically, salo was an important part of the Ukrainian diet because of its high energy content. 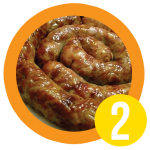 At a time when every rural Ukrainian family had pigs and chickens, meat was constantly on the table. This tradition prevails today, in cities and villages alike. The aromatic home-made Ukrainian sausage, known as kovbasa, is substantially better than store-bought sausage. To prepare it, thin casings are stuffed with ground meats, fats, and spices. Afterwards, it’s customary to either bake it in the oven or, if you’re in a hurry, fry it up on a pan. 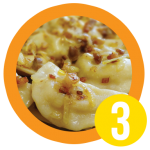 Varenyky with sauerkraut or potato

It would be impossible to imagine Ukrainian food without varenyky. Varenyky, known more commonly in the English-speaking world by the name of their Polish counterpart, Pierogi, are small dumplings stuffed with a potentially unlimited selection of ingredients. They are a food loved for every occasion. The most traditional stuffing is sauerkraut or mashed potatoes and they are usually topped with sour cream or fried onions. Ukrainians also love sweet varenyky, most popularly stuffed with sour cherries. 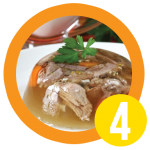 This cold snack is made of meat gelatin. To make it, meat broth has to boil for a very long time, often mixed with onions, carrots, and bay leaves. Its readiness is checked when fingers are dipped in the broth — if they come out sticky, the broth is ready. Then, the bones are taken out of the broth, which is poured into some sort of mold. When it’s refrigerated, the broth hardens into a gelatin that is tasty with mustard or horseradish. 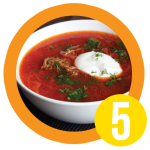 Borshch is probably the most recognized Ukrainian dish. There are more than 300 types of borshch, and even if two cooks make it out of the same ingredients, it will end up tasting differently anyway. Ukrainian borshch is a type of soup usually prepared with cabbage, potatoes, carrots, onions, parsley, and many, many beets, the main thing that gives borshch its distinct dark red color. 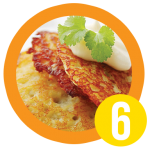 Potato pancakes, or deruny as they’re known in Ukraine, are a popular dish that likely were invented in neighboring Belarus. They are prepared from finely-shredded raw potatoes mixed with eggs and flour. They are then fried in a well-oiled griddle, where the potato batter is poured to form golden-brown pancakes. A favorite topping is sour cream. 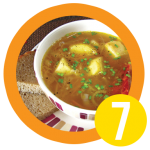 Kapusniak is a dish loved by the Zaporizhian Cossacks. It’s a soup made from freshly-brined sauerkraut and fatty bacon, sometimes ground together with flour. 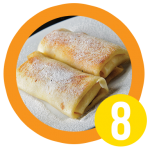 Ukrainian crepes are an elegant and delicate food. Known as nalysnyky, the Ukrainian way of preparing crepes can include any of a number of fillings, the most popular of which is soft cheese. Berries are a favorite too, for dessert, or meat and mushrooms for lunch. As you would guess, they’re also usually topped with sour cream. 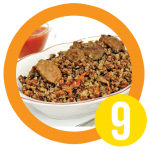 Meat from a suckling pig was always a rare treat for Ukrainians, since it didn’t come cheap. This dish is prepared today only for the biggest feasts, like weddings. The suckling pig, no bigger than four pounds, is fully roasted then stuffed with buckwheat and onions. 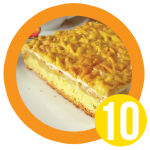 The idiom “American as apple pie” doesn’t apply to Ukraine, though there’s plenty that make the Ukrainian variation unique. The filling is made from apples, nuts, and sugar, and more recently, cinnamon. The dough is traditionally yeasty and fluffy, but a strudel-like crispy or flaky crust is also accepted. The dough is put in a pan, stuffed, and covered with a decorative layer of dough, then baked until golden-brown.