Since its founding in Kyiv, Ukraine in 1918, the Ukrainian Bandurist Chorus has been an unbroken thread in the Ukrainian Spirit. After nearly three decades of performance, Joseph Stalin perceived the spread of Ukrainian tradition through song as a threat, and under the then-newly formed Soviet Union, executed many of its members.

On Saturday, December 6th, the Ukrainian Bandurist Chorus visited St. Joseph parish with a Christmas concert fundraiser. Under the direction of maestro Oleh Mahlay, the concert took place inside the church on the solea in front of the iconostas.

With nearly 500 guests in attendance, and standing room only, the Chorus enchanted the audience with its repertoire of sacred carols and songs of Ukrainian poet and artist Taras Shevchenko.

Since its founding in Kyiv, Ukraine in 1918, the Ukrainian Bandurist Chorus has been an unbroken thread in the Ukrainian Spirit. The Chorus, endearingly referred to as the banduristy, named after the bandura instrument which is played, adopted an ideal of – God, truth, freedom, and human dignity, heralded through song. After nearly three decades of performance, Joseph Stalin perceived the spread of Ukrainian tradition through song as a threat, and under the then-newly formed Soviet Union, executed many of its members. Fortunately with the assistance of the allied forces, all of the chorus’ members immigrated to Detroit, Michigan, in 1949. 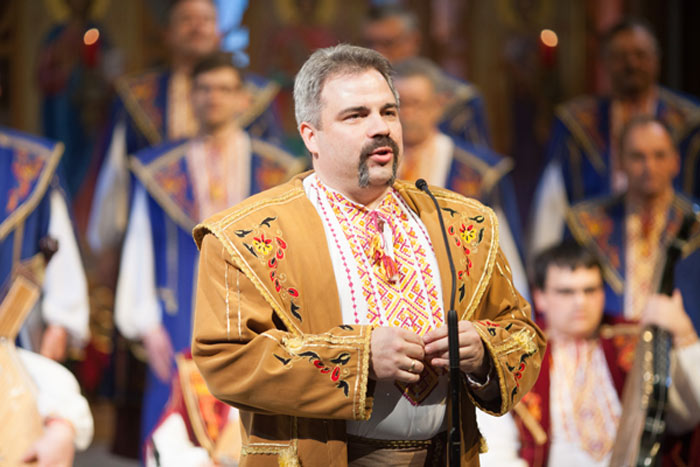 Since then, the Ukrainian Bandurist Chorus has continued to cultivate the beauty of Ukrainian music through its repertoire of over 500 songs, by performing to audiences thought North America, Europe, and Australia.

Traveling from across Canada, and coast to coast within the United States, the members of the ensemble volunteer their time for monthly rehearsals, and performances. Some of these talented musicians come with professional backgrounds in law, medicine, engineering and business, while others are students or retirees. Many of them are not only second and third generation Americans and Canadians, some are even second and third generation ensemble members, following in the footsteps of their fathers and grandfathers. 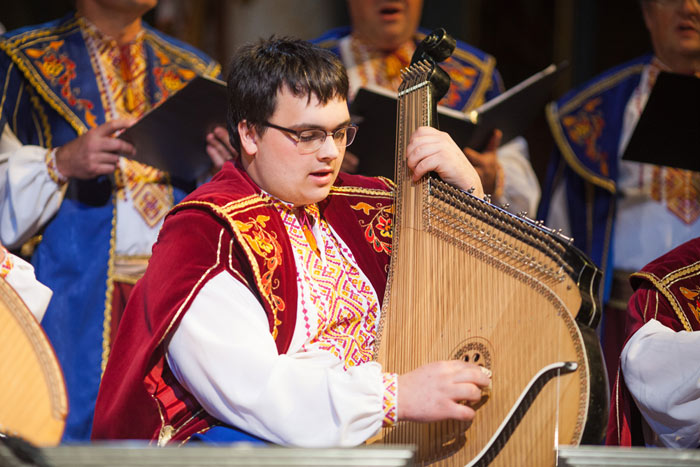 No ensemble however, would be complete without its conductor. Although a practicing attorney, Maestro Oleh Mahlay has studied bandura since the age of 15, conducted choirs since the age of 16, and has received numerous musical accolades for performance in both violin and piano. He began his second tenure as conductor in 2012, having previously served from 1996-2008.

Though the evening primarily consisted of music of the Christmas Season, the first portion of the concert featured music written to the poems of Ukrainian author and artist Taras Shevchenko. Born into serfdom 200 years ago, Ukrainians around the world recognize even today the powerful words of freedom and independence written by this founder of modern Ukrainian literature.

One year after the brutal beating of students and journalists on the Maidan in Kyiv, Ukraine, and rampant killings of innocent citizens, Shevchenko’s thoughts and words continue to evoke a spirit of liberty, and inspire the hearts and souls of millions.

One song that was performed that evening to the words of Taras Shevhcenko was Otaman Hamalia, and was dedicated to those who over this past year lost their lives so that others may live in freedom. In another, Shevchenko compares the bandurist to a grey winged eagle, spreading his wings in flight; wishing that he too could fly across the steppes like the eagle, where there is freedom in the open fields, and where the blue seas praise God. The eagle is a symbol of courage, strength, and immortality, so although Shevchenko laments that fate prevents him from being able to do so, he wishes the eagle, the bandurist, prosperity in the distant and foreign land.

The modern bandura has between 50 and 65 strings, arranged like a piano’s keys, and is played by plucking on the strings. It is made of wood, and has a sound that is a cross between a lute and harp, but is played upright. Some ancient banduras have as few as 24 strings, however many of those used in the concert were Kharkiv style banduras whereby all of the strings are played with both hands all the time. With a standing ovation, and repeated bravos, the Chorus repeated one of their earlier songs, then ended the concert with a sing-along of Christ is Born (Boh Sya Rozhdaye), and Silent Night. Fortunately for the parish, and in thanks for allowing the Bandurist Chorus to sing at St. Joseph’s, we were graced by their song again, when they sang the responses to the Diving Liturgy on Sunday morning.

10 Facts about the Euromaidan

Read more
10 Facts about the Euromaidan