The name Nadiya Savchenko rolls off the tongue of Western World Leaders every day. The name Nadiya literally translates to the English word “Hope,” and Savchenko’s life has been a source of hope for many Ukrainians. Her story is perhaps the most commonly known of all those originating from the Ukrainian-Russian conflict. As a Member of the Parliament of Ukraine and a military pilot, Nadiya Savchenko has been a prisoner of war in Russia for over eight months. Becoming a hostage of the Russian regime, Nadiya represents all those Ukrainians who have been taken illegally and against all international laws into Russian territory. Regarding her innocence, the evidence is irrefutable.

The name Nadiya literally translates to the English word “Hope,” and Savchenko’s life has been a source of hope for many Ukrainians.

According to Russia, Savchenko is a suspect in the murder case of two journalists, but Savchenko was captured while on active duty in eastern Ukraine, then surreptitiously smuggled hundreds of miles into a western province of Russia. By international standards, Savchenko is a prisoner of war. Still, no one has been able to force the Russian justice system into freeing Savchenko — not the Minsk agreements, not the Parliamentary Assembly of the Council of Europe, and not even the tumultuous outcry from international lawmakers. 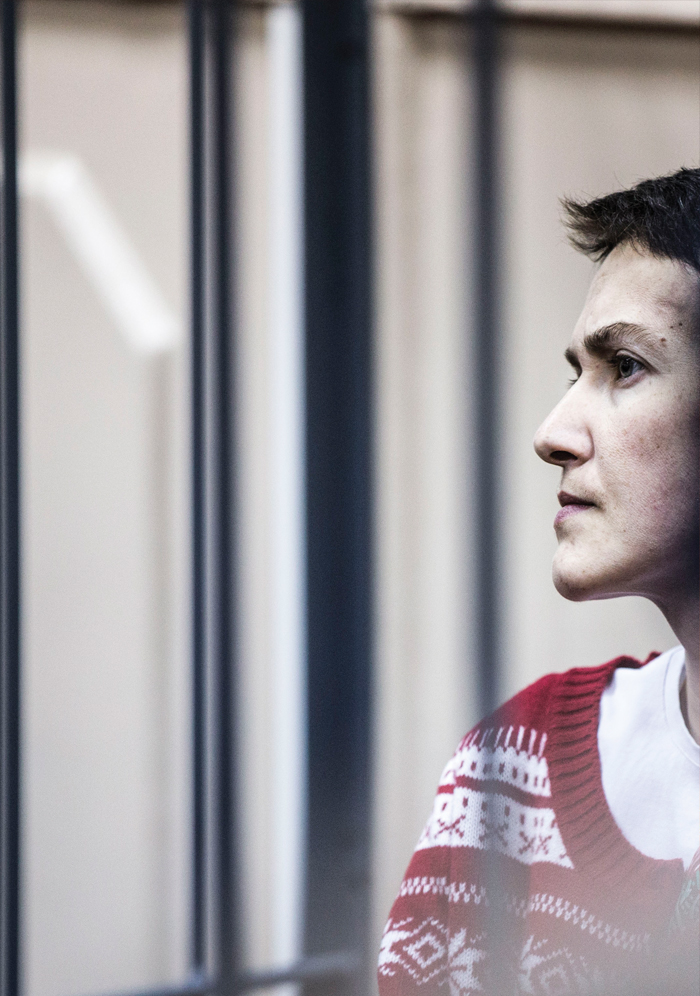 Rising against the tyranny of the Russian government and the absurdity of the accusations, Savchenko went on a hunger strike. Despite her failing health, she has kept up the strike for over two months. In honor of Savchenko’s story and her courage, and as a symbol of valor for the Ukrainian people, President Petro Poroshenko officially awarded Savchenko the title ‘Hero of Ukraine’ on March 2.

Savchenko was kidnapped in mid-June of last year. On July 9, 2014 the Investigative Committee of the Russian Federation (Russia’s version of the FBI) formally charged Savchenko with the murder of two Russian journalists in Luhansk, Igor Kornleyuk and Anton Voloshin, who, according to Ukrainian security officials, were suspected of collaboration with terrorists. 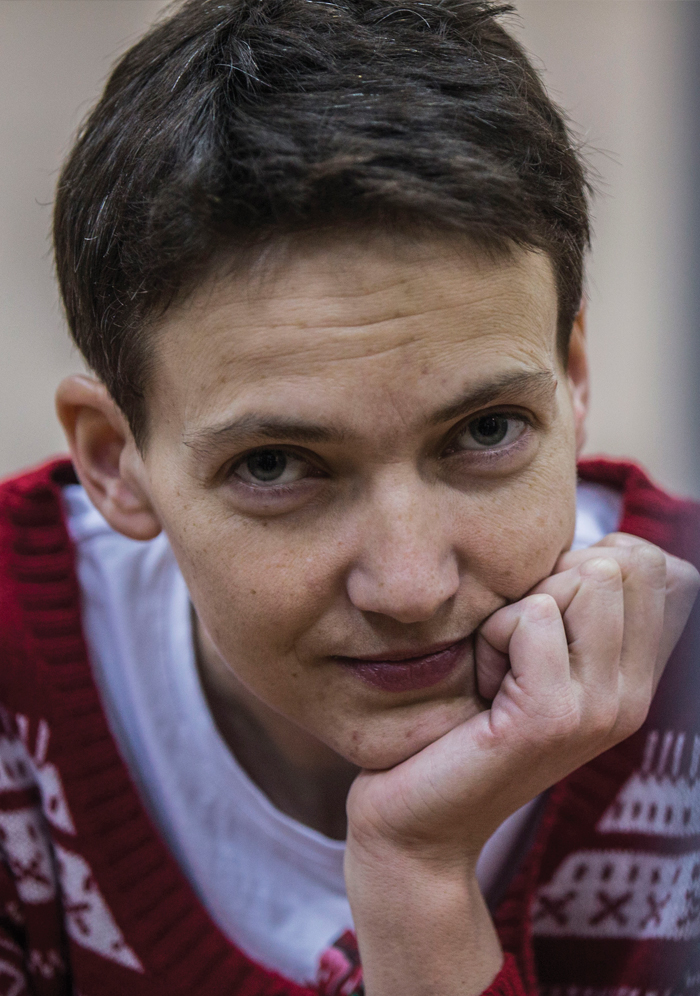 On the day that Savchenko was captured, Russian militants first kidnapped about eight other Ukrainians. They then headed to the village Metalist where they knocked over two armored vehicles. Savchenko was on her way to help the wounded when separatists grabbed her. She was able to tell this story after her arrest during an interrogation by the separatists. The video of the interrogation went viral. According to Savchenko’s lawyers, after the death of the two journalists from Moscow, there was an order to figure out the situation and find a guilty party immediately.

Savchenko was in the wrong place at the wrong time.

She was the only woman and officer among all the prisoners, and she wasn’t scared to voice her opinions. A few days later some of the captured men were exchanged for terrorists, but Nadiya Savchenko was instead illegally transferred to Voronezh, a city in the heartland of western Russian.

Russia’s story, however, claims that Savchenko crossed the Russian border herself. Supposedly after abandoning her unit in eastern Ukraine, she crossed the border into Russia as a refugee. Allegedly, authorities only discovered she was a suspect in the murder of the two journalists when checking her documents at the border. Although Ukrainians insist that the death of the journalists was an accident, Russian authorities purport that Savchenko disclosed a location of the journalists so that they could be purposefully killed with mortar fire. 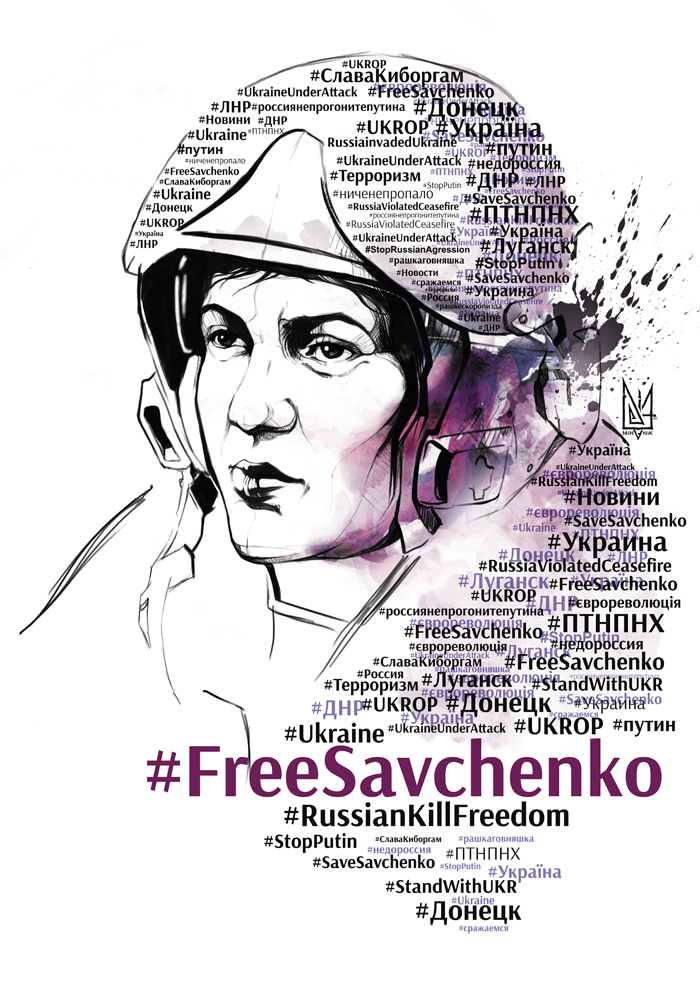 After an extensive investigation, extensions to her jail time, and consultations with psychiatric experts, Savchenko declared a hunger strike on December 15, 2014. She developed an ear infection, for which no one intended to provide treatment.

Then, her lawyers garnered her alibi. At the time of the journalists’ death, Russian militants had already captured Savchenko.

The Russian investigation, however, ignored the newfound evidence, and so Savchenko decided to endure her hunger strike to the bitter end.

Ilya Novikov, Savchenko’s Russian lawyer, shared with Ekho Moskvy (Echo of Moscow Radio) his personal reflections on his many months of correspondence with Savchenko. “She is an absolutely enduring person. She is absolutely free-spoken and sincere. I don’t know to what extent this was our [Russia’s] luck, that of all the possible scapegoats it was Nadiya who fell into Russia’s hands. If it were any other person, a seasoned fighter – anyone – in this situation that Nadiya is in, they would have broken. They would have lost hope.”

Nadiya’s mother, Maria Savchenko, told The Day newspaper that her daughter has always been independent and incapable of ignoring injustice. “If you wanted to help her, she’d always just wave her hand to say ‘I’ll do it alone’.” From the age of four, Savchenko dreamed of being a pilot. She repeatedly applied to the Kharkiv Air Force University, but was denied each time “for being a girl.” Still Savchenko refused to give up or change her mind about joining the army. She joined a radio operators unit, and then spent six months stationed in Iraq’s peacekeeping contingent. After returning from Iraq, her dream to fly galvanized her courage to personally visit the Defense Minister Anatoliy Hrytsenko, and ask him for permission to learn to fly. He granted her request, and she became a Mi-24 helicopter navigator-operator.

Nadiya will live on as symbol of Ukrainian Resilience – and Hope Never Dies.

On the Maidan, Savchenko was always in the center of all the action. She was seen on Hrushevskoho Street during clashes with the special forces units. In her own apartment, Savchenko organized a place for Maidan activists to rest and rehabilitate. Her sister, Vira, reflects on the beginning of the January 19th events, “I remember that night… Our boys went on the offensive against the boys from the special forces. Nadiya came to their defense, lest we threw stones at them. In a few days she and I were holding wooden shields for our protection. Till this day, we’re still fighting …” 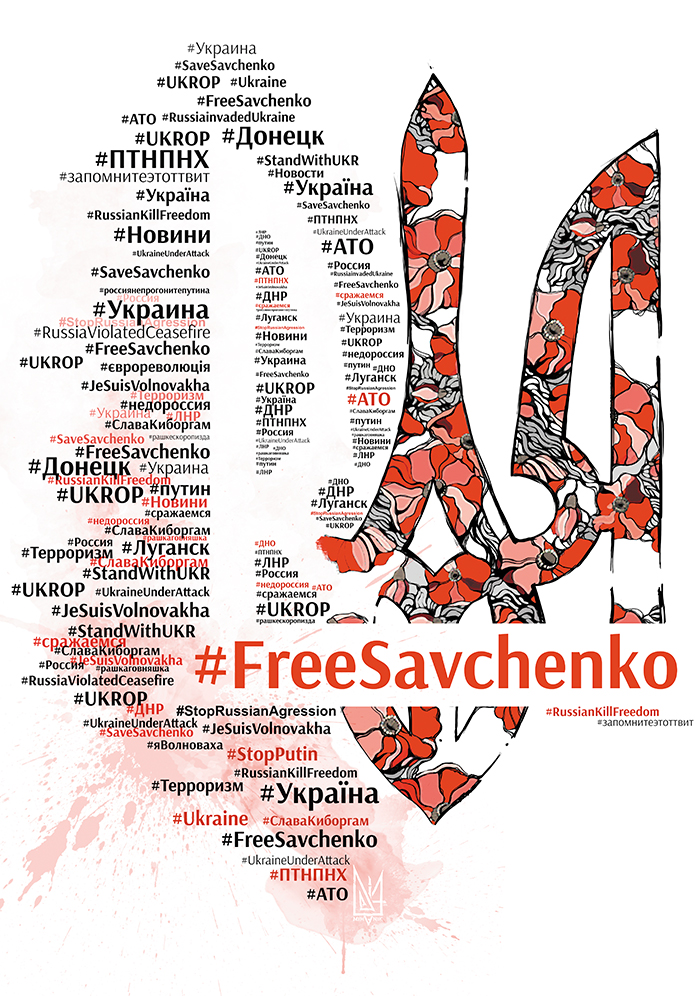 When Ukraine’s Anti-Terrorist Operation (ATO) began, Savchenko went to fight in Aidar, a volunteer battalion. She spent about a month in the East until she became a symbol of invincibility for the entire country. She has no intent to stop her hunger strike.

In a letter to the Crimean Tatar leader Mustafa Dzhemilev, who once starved in jail for 303 days, Savchenko wrote, “I haven’t been starving for as long as you, but I will endure for as long as it is necessary, until my people have the right to be Ukrainian on their rightful Ukrainian land, until they can live fairly and honestly, and until they are able to decide their own fate!”

Nadiya will live on as symbol of Ukrainian Resilience — and Hope Never Dies.

Read more
Who is Michael Shchur?