These kinds of words resonate deeply, not only with those living in the 21st century, but also with the people who have been immersed in the centuries-long tradition of the Kobzars – Ukraine’s wandering, often blind bards. Their repertoire runs the gamut of Ukrainians’ psyche – whether a philosophical hypothesis, the retelling of an ancient legend, or Christian contemplation, they have been relevant since the time of their composition.

America’s very own Kobzar, Julian Kytasty, visited St. Joseph the Betrothed Church in Chicago in March to lead the congregation in an evening of ancient Ukrainian Lenten meditations – with songs about sin, repentance, death, and paradise.

Throughout Ukrainian history, songs like those sung openly by Kytasty in the comfort of a Chicago church were so powerful, so compelling, that they were banned by Russian authorities. Much like today’s conflict in Ukraine is driven by deceit and bloodshed pitted against dignity and truth, Moscow attempted to erase the Kobzars’ music – and likewise their message – in a series of massacres through the 1930s. These massacres were the subject of Oles Sanin’s 2014 Academy-award nominated film, “The Guide,” scored by Kytasty, who recorded the music dubbed to the film’s characters.

It’s only by chance and through the efforts of a few ethnographers, that Kytasty is able to continue their tradition, and share it with an audience moved by that music today. In addition to being an accomplished classical bandurist, Kytasty is part of a revival movement, working diligently with scholars and musicians in Ukraine to piece together how bandura music would have sounded before it underwent major modernization in the 19th and 20th centuries. 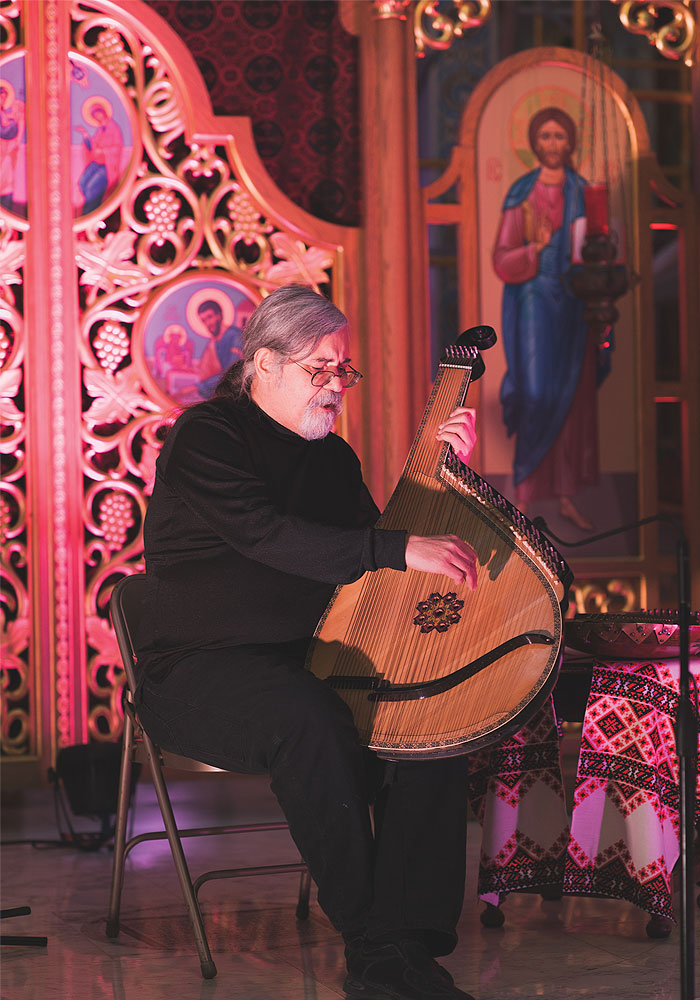 Understandably, the evening performance at St. Joseph church demonstrated how the Kobzar tradition is deeply rooted in the Ukrainian Christian Tradition and Eastern European philosophy. In addition to the song about truth and falsehood, Kytasty led those present through at least 400 years worth of Ukrainian chants and psalms, accompanied by both his 21-stringed old-world style bandura, and a more modern 55-stringed classical bandura.

Continuing the Lenten theme, Kytasty also sang excerpts of the Jerusalem Matins, a service assigned to Good Friday whose text was composed in the earliest centuries of Christianity, with music composed by Ukrainian-Canadian Pavlo Matsenko.

Kytasty was born in Detroit to a family of bandurists. His father and grandfather came to the United States from Ukraine in 1949 as some of the 17 surviving members of the Ukrainian Bandurist Chorus, which was founded in Ukraine in 1918, and continues to perform today.

Julian Kytasty’s great uncle and teacher, Hryhory Kytasty, was a conductor of the Chorus and perhaps the greatest Ukrainian composer to have worked in the Diaspora. He was awarded the presidential Hero of Ukraine medal in 2008 for “outstanding personal contributions to the national and spiritual regrowth of Ukraine, and the spread of Ukrainian and Kobzar culture in the world.”

To this day, Julian Kytasty remains only one of two full-time bandurists living and working outside of Ukraine. In that capacity, he serves as music director of New York Bandura Ensemble, which maintains a comprehensive bandura archive at the Ukrainian Museum and collaborates with other ensembles like the Yara Arts Group on theatrical productions. Kytasty is also the co-founder of a number of ensembles himself, like Paris to Kyiv and the Experimental Bandura Trio.

Kytasty recently released two albums – one from his Kobzar repertoire titled “Songs of Truth,” and another Ukrainian-Ashkenazi Jewish fusion album called “Night Songs from a Neighboring Village,” which was a collaboration with world-renown Klezmer artist Michael Alpert.

Though his evening in Chicago needed little fanfare, Julian Kytasty proved once again that Ukrainian culture and the Ukrainian people can maintain a marriage of the traditional yet modern, unique yet inclusive, honest yet unabashed. Much like the songs about life and death that were performed at St. Joseph Church deal with difficult subjects, the Ukrainian people they spring from embrace them head-on, and continue to persevere.