With Oscar chances high, ‘‘Leviathan’’ is a must-see for Ukrainian Americans.

With the Golden Globes and Sundance behind us, the film world’s collective attention turns to the Academy Awards. As a filmmaker, this in and of itself is enough to get me excited. However, this year’s top foreign-language contender, Leviathan, compels the Ukrainian in me to pay even closer attention.

Set on the far northern coast of Russia, presumably removed enough from the central government in Moscow, Leviathan opens with frustrated auto mechanic, Kolya, facing his last appeal to keep his home and business before being evicted by a corrupt mayor. Kolya, played by Aleksei Serebryakov, enlists the help of an old friend, Dima, an influential lawyer from Moscow in a last attempt to keep his livelihood. Dima, played by Vladimir Vdovichenkov, travels to the isolated village with a thick folder bearing years of evidence from the mayor’s shady dealings. But Dima’s mission is complicated by Kolya’s moody teenage son, Roma, played by Sergey Pokhodaev, and his unhappy second wife, Lilia, played by Elena Lyadova.

Just when Dima thinks he can successfully blackmail the mayor into leaving Kolya alone, the movie truly begins. The characters’ lives unravel on the screen for two hours, leaving only the mayor and his cronies unscathed – at least superficially.

Having won a Golden Globe for best foreign film, a Palm d’Or for best screenwriting, and a whole cadre of other international awards for Leviathan, director Andrey Zvyagintsev calls it “a very Russian film.”

“We live in a feudal system when everything is in the hands of one person,”

says Zvyagintsev, “everyone else is in a vertical of subordination.”
The film uses allegory to depict today’s corrupt Russia as an insurmountable sea monster, like the film’s biblical namesake, and, like in Old Testament, the leviathan is evil incarnate. Zvyagintsev’s screenplay depicts Putin’s Russia using the same words to describe the leviathan in book of Job, “if you lay a hand on him, you will remember the struggle and never do it again!”

The film’s leviathan is so literal at times, that it’s hard to ignore the message that comes across. While dealing with past tragedies, the characters meditate on the washed-up bones of a whale; when enveloped in depression, an even bigger, living whale waits to swallow up its newest victim. The genius of Zvyagintsev is that, in his eyes, the Soviet Union was one leviathan, while Putin’s Russia is just another.

Just like how a story can only have a happy ending depending on where you end it, the history of Russia, and its snapshot in Leviathan, don’t really allow for a happy ending to step in anywhere.

What does this film have to do with Ukraine though?

Unfairly or not, today’s conflict in Ukraine is perceived as a tug-of-war between the West and Russia.

Though I believe this conflict is the unfortunate result of Ukrainians’ stand for dignity over tyranny, Ukrainians have been faced with the personal dilemma of who to believe, who to align themselves with, and whether or not they are willing to place their trust in Russia or the West.

Indeed, there is ample evidence that Ukraine is actively defending itself against organized Russian military units, instead of, as Russia claims, nobly-intentioned rebels.

Leviathan, by the words of its own director, and by virtue of being banned and condemned by Russian officials, is an honest depiction of life in Russia under the current regime. It depicts the very Russia Ukrainians are fighting to not be a part of, or even closer to; it shows the path Ukraine was on under Yanukovych. 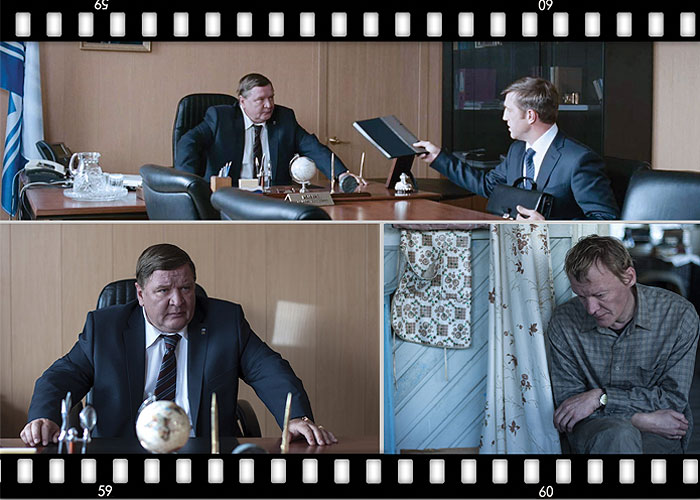 Leviathan is a two-hour testament to what Russia is, and that is something every Ukrainian has to be on the same page with.

Though Zvyagintsev admits the film is partly inspired by the case of Marvin Heemeyer, a Colorado mechanic who was forced out of business by a local city council, the similarities stop there. Leviathan takes on a distinctly Russian character, and is saturated in cynicism harbored in that part of the world for centuries.

We, who have the benefit of living or growing up in the United States and see Ukraine and Russia during periodic visits, don’t need to dig very deeply to see where life is better, or where the standards of living are higher. The tragedy is, that many people still believe that Russia holds a match to the West’s ability to do good. Many countries like Poland and the Czech Republic that had previously been behind the iron curtain have managed in only a few decades to throw out most of the Soviet world’s baggage by accepting Western values and standards of living.

Of course, we cannot ignore the West’s imperfections and record of its own wrongdoing, but I strongly believe the West strives to learn and grow from its own mistakes. Leviathan proves that Russia is where short term memory is the best policy.

In fact, we in the West have found corruption narratives to be so compelling, and have internalized its self-criticism to the point that there’s almost a niche genre for them. Audiences have embraced depictions of Western corruption in shows like Netflix’s House of Cards, about a corrupt politician in the high echelons of the United States government, or HBO’s The Wire, which paints a bleak portrait of Baltimore’s law enforcement system. Leviathan, however, depicts Putin’s Russia as institutionally corrupt everywhere you look.

While the media’s portrayal of Western corruption inevitably has corrupt government pitted against good government, Leviathan shows no light at the end of the tunnel for goodness to ever prevail in Russia’s government.

The concept that depicting Russian corruption for sake of compelling storytelling is so taboo that Russia’s Foreign Minister, Vladimir Medinsky denied the film depicted any fair representation of Russia, leading to a de-facto ban on the film veiled under a new foul-language ban in Russian movies. Medinsky then went ahead to propose new regulations on films that “defile national culture.”

Zvyagintsev is so convinced of his story’s significance, that he even encouraged the public to illegally download the movie, with as many as four million people taking up his offer.

The genius of Leviathan is that it depicts a breaking point for people who have survived regime after regime. Leviathan is what happens when survivors are tired of just getting by. Ukrainians shouldn’t have to survive as Russians have had to. Ukraine should thrive as a Western society.

Read more
Ukraine Through the Eyes of an American